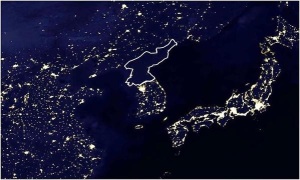 This is a picture of North Korea at night seen from space.  Notice how dark it is since they don’t have the resources to have electric lights like their neighbors, South Korea, Japan, and China.

In North Korea, starving people eat rats to supplement their meager diet.  They still succumb and die in the streets by the thousands.  In winter thousands more freeze to death.

The next time you hear some environmental activist tell you that global warming is killing us all, the next time you’re called a global warming denier when you point out that the the data simply does not indicate that the planet is warming, or you mention that New York city is not underwater like they said it would be, or comment that the polar icecaps are larger than they have been in years, and that the polar bear population is growing, not shrinking, that category 4 hurricanes have not devastated the US as they predicted, be prepared for them to go all Kim Jong Il on you.  Watch them sputter about “settled science” or the so called “97% of scientists,” then If you don’t kowtow, get ready for the threats.

That’s right.  They want you prosecuted under RICO statutes if you don’t accept whatever claims they make as unvarnished truth.  They’ve been making outlandish claims since the original Earth Day in 1970.

“[One] theory assumes that the earth’s cloud cover will continue to thicken as more dust, fumes, and water vapor are belched into the atmosphere by industrial smokestacks and jet planes. Screened from the sun’s heat, the planet will cool, the water vapor will fall and freeze, and a new Ice Age will be born.”

“The world has been chilling sharply for about twenty years. If present trends continue, the world will be about four degrees colder for the global mean temperature in 1990, but eleven degrees colder in the year 2000. This is about twice what it would take to put us into an ice age.”

“Civilization will end within 15 or 30 years unless immediate action is taken against problems facing mankind.”

“We are in an environmental crisis which threatens the survival of this nation, and of the world as a suitable place of human habitation.”

“Man must stop pollution and conserve his resources, not merely to enhance existence but to save the race from intolerable deterioration and possible extinction.”

“Population will inevitably and completely outstrip whatever small increases in food supplies we make. The death rate will increase until at least 100-200 million people per year will be starving to death during the next ten years.”

“Most of the people who are going to die in the greatest cataclysm in the history of man have already been born… [By 1975] some experts feel that food shortages will have escalated the present level of world hunger and starvation into famines of unbelievable proportions. Other experts, more optimistic, think the ultimate food-population collision will not occur until the decade of the 1980s.”

“It is already too late to avoid mass starvation,”

“Demographers agree almost unanimously on the following grim timetable: by 1975 widespread famines will begin in India; these will spread by 1990 to include all of India, Pakistan, China and the Near East, Africa. By the year 2000, or conceivably sooner, South and Central America will exist under famine conditions…. By the year 2000, thirty years from now, the entire world, with the exception of Western Europe, North America, and Australia, will be in famine.”

“Air pollution…is certainly going to take hundreds of thousands of lives in the next few years alone.”

“In a decade, urban dwellers will have to wear gas masks to survive air pollution… by 1985 air pollution will have reduced the amount of sunlight reaching earth by one half.”

“At the present rate of nitrogen buildup, it’s only a matter of time before light will be filtered out of the atmosphere and none of our land will be usable.”

Let’s face it– if these alarmists had their way with our energy policy, our freedoms would dissolve, we’d be sitting in the dark, as thousands starved, and even more froze to death.  Just like they do in North Korea.